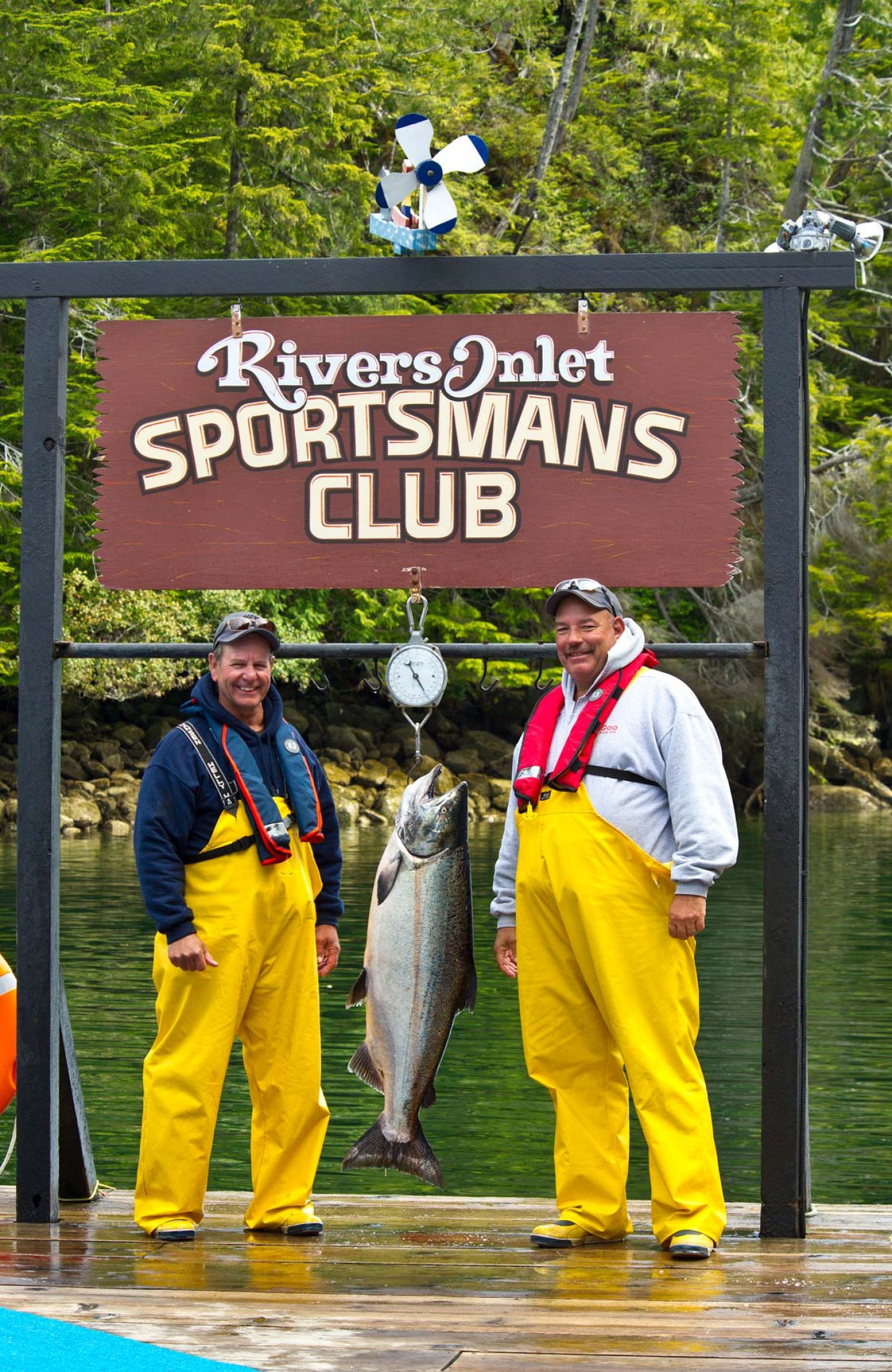 At the Rivers Inlet Sportsman’s Club we target Chinook (king), coho (silver), chum & pink salmon. The salmon returning to our waters each summer to spawn are on average larger than those from other rivers systems because of our unique gene pool of bigger, fatter fish. As a result, Rivers Inlet is world renowned for its consistent fishing for trophy salmon. We are a place where world records are made & broken every summer. The largest salmon ever recorded anywhere in the world, 126 lbs., was caught minutes from our lodge. Not only is Rivers Inlet a destination for tens of thousands of salmon specifically returning to our river system, it is also & a funnelling point for salmon migrating down the Pacific west coast to the many hundreds of other rivers systems.

We operate during the peak of the salmon runs in  July, & August & Early September. Opening for this short season during the peak of the salmon runs ensures our guests the best opportunity for fishing success.
Chinook salmon are the largest of all species of Pacific salmon. The average Chinook caught at the lodge ranges from 15 – 25 lbs. – although there are 40, 50 & 60 + pounders caught every summer. Each season the largest salmon caught on the West Coast of North America is usually taken in Rivers Inlet & often tips the scales at over 70 lbs. These are incredibly strong fish that can take anywhere from 30 minutes to 3 hours to get into the boat. There have also been longer fights, the kind of battles that fishing legends are made of & tales that makes Rivers Inlet a world famous salmon fishing destination.

Coho salmon (silvers) are smaller, livelier salmon. The average coho caught at our lodge range from 10-12 lbs. in the early season & 12-15 lbs. in the late season. However, there are lots of 15-20 pounders caught each summer & usually a few fish weighing in at over 20 lbs. These hard fighting fish are swift, agile & acrobatic. They are especially fun to play when using light tackle. Their fight is exhilarating as they jump & flip out of the water. Pound for pound the coho salmon is one of the world’s hardest fighting game fish.

Halibut are the world’s largest flatfish that reside on the sandy bottom. They have been reported to reach over 500lbs. Our lodge record is 156 lbs. & average catches range between 10-50 lbs. They are dark brown on one side, white on the belly & feed on the sandy bottom on pretty much anything that fits in their mouth like a vacuum cleaner.  We fish for them in depths from 100-300 ft. They are very prized by both sport & commercial fisherman & their firm tasty white flesh sells for upwards of $30/lbs.

Lingcod are a reef fish that inhabit rocky outcroppings & drop offs. They have been known to reach over 100 lbs. Our lodge record is 36 lbs. & average catches range between 5-15 lbs. They are spotted in various shades of grey/brown. We fish for them on rock reefs in 50-250 ft. of water. Their firm white flesh (sometimes blue/green) is also delicious & thus prized by anglers.

I have never been disappointed, hungry, or un-entertained while being here. The fishing is absolutely incredible, the food is gourmet, & the staff – as well as other guests – are some of the best people I have ever met. I have caught some trophy worthy fish including a 53 lbs Chinook & a 130 lbs halibut, with the help of the expert fishermen they have at Sportsman’s. I truly have had great adventures on my father-daughter trips out to the lodge. It’s a chance to spend time with my dad away from our busy lives, & we are doing something we both love. Once his tradition with his father, now our tradition. I hope for it to be a tradition I pass onto my kids & grandkids in the future. 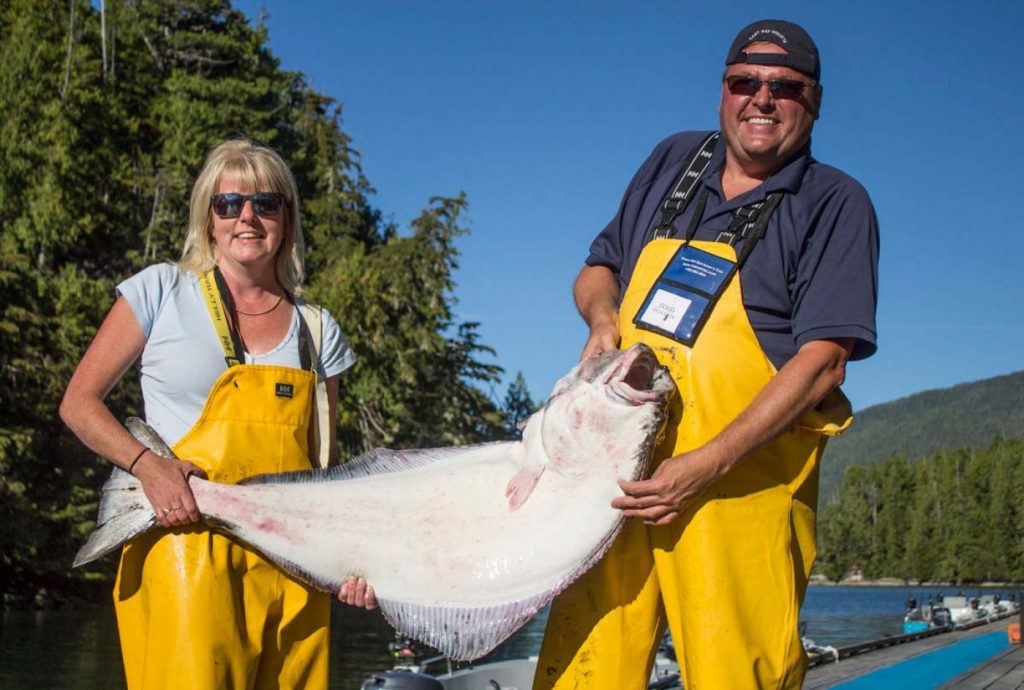 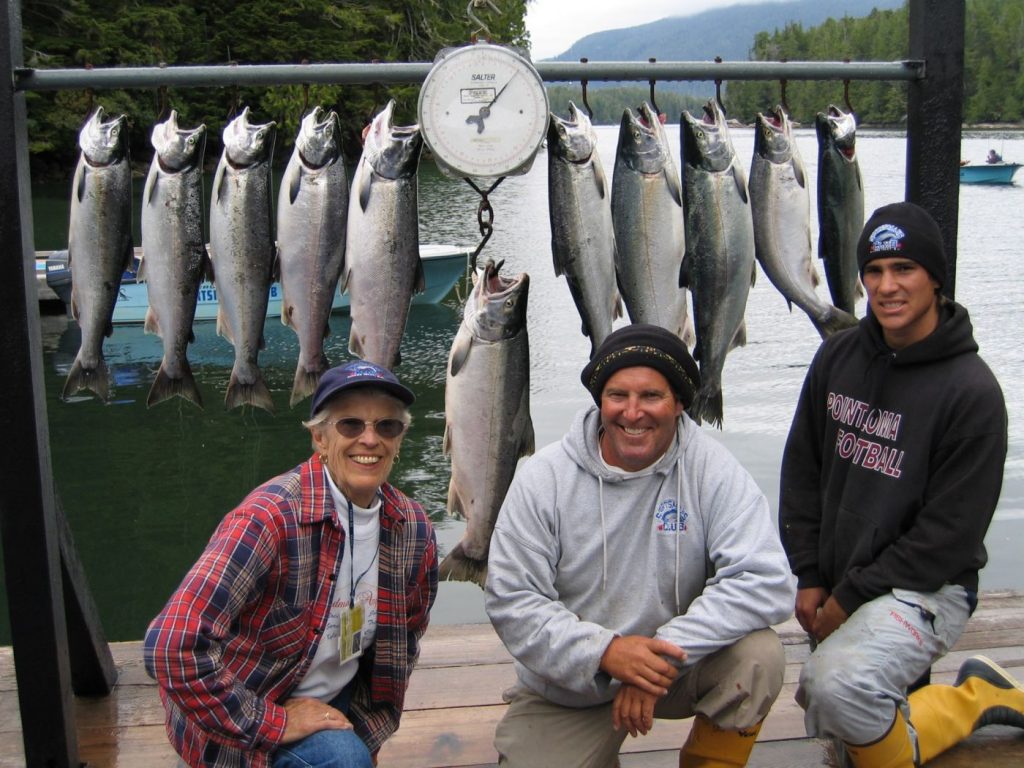 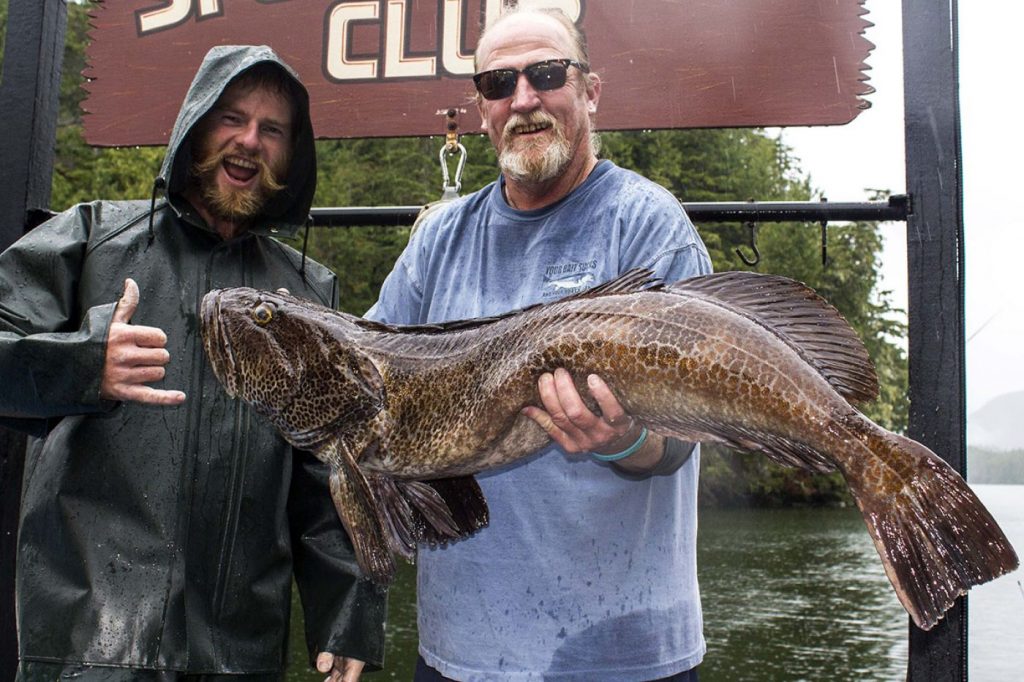