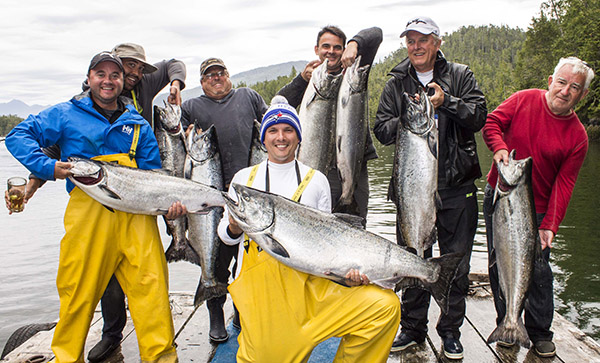 Chris W (front centre) with the largest Chinook/king salmon of the season 43 1/2 lbs. & the rest of the "car guys" were right behind him!

Here is a summary of the biggest fish caught in the 2015 season: Chinook/king – Chris W – 431/2 lbs; coho/silver – Devin Y – 17 lbs; halibut – Davin F – 130 lbs; lingcod – Scott M – 24 lbs.
This summer, the most consistent & overall best fishing was only minutes away from the lodge. This reminded us of why we located the Sportsman’s Club in our tranquil bay in calm waters at the ocean end of Rivers Inlet. The Chinook/king salmon fishing was nothing short of spectacular all season long so it was a record setting summer. The coho/silvers showed up nice & early in late June & were steady right to the end of August.
The two hottest spots all season were Kevin’s Corner & The Bluff which are literally just around the corner only minutes from our docks. This made for less travel time & more fishing time. The Wall, which is always a consistent producer, was steady as always & so was the nearby Dome Rock (my favourite spot). Strangely, nearby Cranstown Point never really turned on. Having said that, I did guide my biggest fish of the season there, a 37 ½ pound beauty that gave us a spirited fight. I was out with longtime guest Phil M. & his wife Arlene & our success was the result of classic “big fish discipline”. We had only a couple of light bites & then we made “one more pass” & wham FISH ON! We fought it well after sunset & came back to a raucous crowd at the lodge. There was a derby on & there were rumours swirling that we had boated a “monster”. My 11 year old son was 10 feet off the ground as he greeted our boat at the dock. He said, “Dad you only go out for a couple of hours & come back with the biggest fish all weekend, you are a ROCK STAR” he was so proud! Phil ended up winning the derby & showed his usual generosity by donating his $2,000 winnings back to the staff as a tip. Of course, I rubbed it in as Phil had tried to get me to go to Kevin’s Corner where I never go as I don’t feel “fishy” there but that is another story.
Calvert Island was OK but not really worth the 20 minute boat ride when the fishing was so hot locally. We did get some good days over that side of the Sound but not as many as in past years as we just weren’t fishing there much.
The stretch between The Bluff up Rivers Inlet towards Drainy Inlet & Wadhams Point was a solid producer this season as well. We did make a few trips 35 miles up to the head of Rivers Inlet where the rivers meet the sea & salmon often “hold” until they make their journey up-river to spawn. As usual, we had a few good days but it was hit & miss & not really worth the long boat ride when they were biting a few minutes from the lodge.
Halibut was just OK & as a result it became a “self fulfilling prophecy” because if guests don’t get them the first time they go out they often don’t try again. Angler effort was way down & so were our catch numbers. We still had some good days & some nice halis were caught. Instead, many of our guests turned their attention to lingcod fishing & they were very successful. There were good lingcod to be found along the kelp beds just past Dowling Point on the way to Open Bight & Cranstown Point. However, the kelp beds near Clarke Point on Calvert Island were the new “killing fields” & new guide Duncan (AKA Red Beard) led the charge. His very successful technique was mooching (slow troll) with herring & a 6 oz. weight just off the kelp-laden shoreline.
All in all it was an incredible season of catching for all target species. As a reminder of just how good it was, we are closing up our year end this week & we have all the excess plane & baggage charges that we paid to get all the burgeoning fish boxes out to prove it! Tight Lines, Simon.

"Hi Simon & Crew,
I Just wanted to drop you a note to let you know that our group has finally, after 5 years of visiting various fishing grounds around the Western Coast of BC, decided to return to Rivers Inlet.  We have NEVER gone back to the same place so this is definitely a feather in your cap.  Being in the customer service end of things too many times do we hear only the negative & never the little extra things we do that go well above & beyond expectations.  So I wanted to extend many thanks as our customers that we brought with us on the trip had a great time.  This was in large fact due to the excellent fishing & fantastic food, & the little extras your team went to like guides showing us extra little tricks or the hot water bottle keeping your bed warm before you got in.  The little extras!  You did not lie to us about the water.  Being able to fish in water that did not beat us up like all the other areas & still be able to catch all the same fish was a big plus as well.  I just wanted to say thanks & we are looking forward to seeing you again next year!" 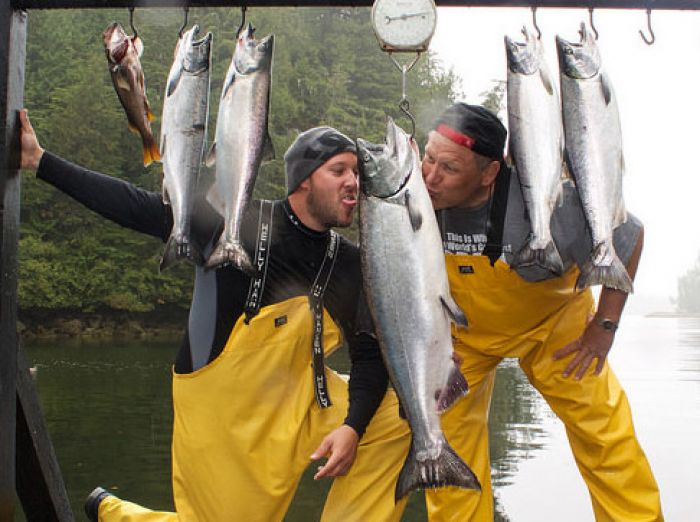 Chris J & Joe D are so excited about eating their catch that they can’t even wait to have them filleted, sashimi anyone?

Fresh salmon is very delicate & has such a wonderful taste unto itself so be subtle & minimalist in your preparation to allow the natural fish flavour to shine through. Every time I ask a chef if they had only one thing in the kitchen to cook with the answer is always the same … salt. We tried this recipe last night & it was delicious! However, others in the kitchen kept trying to add more things to it & I had to almost elbow them away from the marinating fish.

-Barbeque – Heat BBQ to 600 degrees … or as hot as you can get it!
-Cook skin side down with lid closed for 2 minutes then flip it over & repeat for 2 more minutes
-Remove from BBQ & cover & let it “rest” & finish cooking as it cools down a bit
-For thicker pieces of larger Chinook/king you will need to cook slightly longer
-Typical cooking time is 4 minutes/inch of (2 min per side), until it appears half cooked & still pink or even red in the middle
-Only flip it once & if the fish is thicker you do the math
-Squeeze on any remaining pieces of lemon & serve

Salmon flesh is very delicate & even with my years of experience, the past 2 times I barbequed salmon (before last night where I “nailed it”), I overcooked it & it was dry. I was distracted by the guests & the other side dishes I was preparing, SO PAY ATTENTION TO NOT OVER COOK IT!

You can always put it back on the BBQ if it is too rare. Salmon does half of its cooking as it cools before serving. Also, tastes can vary. Some people like it cooked all the way through, some (like me) prefer it medium still pink in the middle & some like it red in the middle, almost “sushi style”. If the skin falls off during cooking just put it aside on the BBQ, cook it until it is crispy & serve as an accompaniment. Many people love BBQ salmon skin. I don’t, it is too rich for my palate. At the very least feed it to you cat or dog as it will make their fur shine or you can even make BBQ salmon skin sushi rolls. Keep the lemon slices from the BBQ aside to use as a garnish. I also like a small dab of wasabi on the side of my plate to spice it up. We typically serve this on a bed of basmati rice & one simple complimentary vegetable. Our latest favourite is baby bok choy. You lightly braise in a combination of oil, butter, garlic, ginger & a splash of white wine. It is also very delicate so heat the chopped garlic & ginger in the oil & butter until it gets slightly cooked & then add the bok choy & a few splashes of wine. Stir together for 1 minute (or less) on medium heat and serve. This dish is great paired with a sauvignon blanc, pinot grigio/gris or any dry white wine. I would avoid heavily oaked chardonnay as it covers up the subtle flavours of this dish, but any wine is better than no wine!

Lingcod are a member of the greenling family. They are bottom dwellers that are unique to North American ocean waters. They range from Alaska to Baja California with their highest concentration being on the BC Coast. They inhabit depths from 30-300 feet. Juveniles lurk in the kelp & sea grass of the shallows & the mature adults are found deeper in rock outcroppings. They live in colonies and do not migrate. They are aggressive predators feeding on just about anything that swims by them & that they can fit in their mouths, even large rock cod. Their lifespan is around 20-25 years & they grow up to 3 feet long, typically to a max of around 70 lbs. The world record is 82.6 lbs. They are a popular sport fish because they are so tasty to eat! Here is more information about Lingcod. 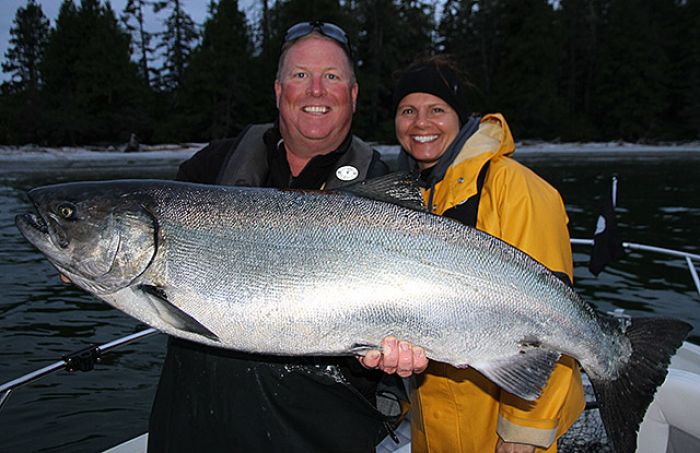 Phil & Arlene are all smiles with their derby winning 38 pound chinook/king guided by Simon
at Cranstown Point.

We have posted photos from each group this summer on FLICKR.

You will see that we have lots of pictures by the scale/sign.
However, they are not as emotive ones that you likely have that were taken out on the water when the smiles & the fish are "fresh".
Also, I think that the iPhone takes better pictures than the camera we had & I know that I took many pictures on the dock with your phones. Please send us a sample of your best images from your trip.

They don’t have to be giant fish just fun pics that give people a "sense of place".

If you could also write up a quick email testimonial about your adventures with us that would be very helpful in getting more people up at the lodge to enjoy the "magic" of Rivers Inlet & the Sportsman’s Club. Just a quick "blurb" about your trip to go with the photos.
Thanks, Simon.
admin2021-05-26T15:17:06-07:00October 7, 2015|