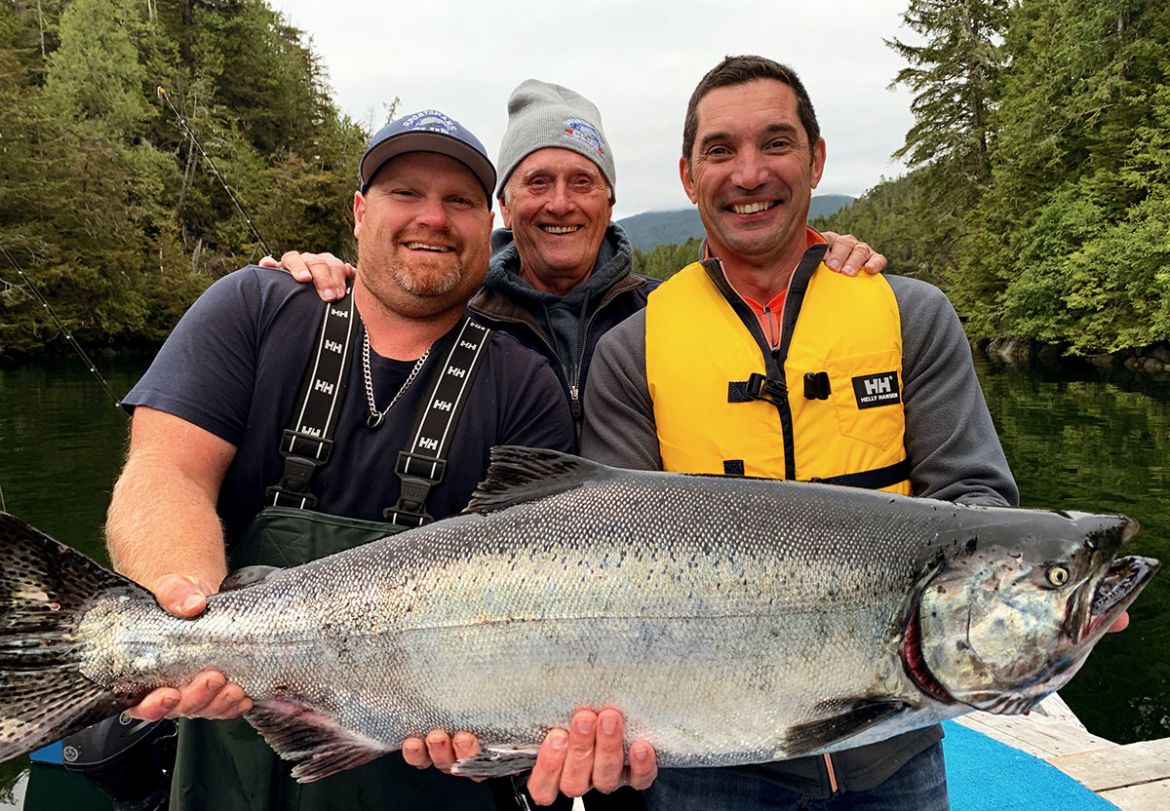 WOW WOW WOW is all we can say about the season so far! The fishing has been consistent all summer with no real gaps in the waves of salmon funneling through our area & the resulting steady action. And again, the best fishing has been at the known spots only minutes from the Lodge. We have had some productive days for those who have made the 20-minute run across Fitz Hugh Sound to Calvert Island. However, it hasn’t really “turned on” there so far this summer. We have yet to have one of those 40 fish tides where the bites are non-stop, you get multiple double headers, keep your limit & release the rest. That could be any day now & hopefully it will be today! So if you still want to plan a fishing adventure with us we have a few last minutes spots available on our upcoming August 18-22 trip. Contact Cathy in our office in town today …
1-800-663-2644 Ph: 250-923-2689 Email: info@riversinlet.com.

We rarely get off the dock but I did have an epic day last week over at Canoe Cove on Calvert Island where we had 4 double headers, boated 15 fish, kept 6 of the biggest ones & released the rest. The school of coho over at Calvert Island has been pretty spread out with the best fishing on any given day right at the lighthouse at Clarke Point with various “hot spots” scattered all the way up to past North, Call & Truman Points North of Safety Cove. The good news is that there have been some trophy sized big Chinook/Kings mixed in with the coho over at Calvert which is always a bonus when you are targeting coho. As usual the Wall, Kevin’s corner & Rough’s Bluff have consistently produced the biggest trophy fish with the largest Chinook this week at Rough’s (aka the “Muff”) that tipped the scales at 33 lbs. & yet again was caught at 69 feet on a white hoochie. With the schools of fish so spread out, the radio has been our best fishing tool with the guides & guests communicating fishing information to each other in “real time” & getting the fleet to move on to the fish when the bite is actually happening. Not only have the fish been spread out at various locals, they have been caught in all different levels of the water column from 30-130 feet down sometime right on the surface & even as deep as 150 ft. Being an “old school” bait fisherman I always push the guests to try bait. We us a whole herring in a teaser head set-up, but every time I do promote this it seems the most productive lure & the most consistent method to get big, small & medium sized salmon is the classic Rivers Inlet set-up of a green flasher & white hoochie. It is nicknamed the “burger & fries” by our guides as it is the easiest go-to, take-out “meal’ for the salmon.

The guides are always making me buy what I call “disco flashers” & other “fancy” terminal tackle. However, this past week more than ever I am 100% convinced that all that colourful exotic tackle is produced just to sell more fishing gear & to look cool in your tackle box! There is nothing more basic than the green flasher & white hoochie. The commercial fisherman on our coast have been using flashers for 50 + years. And just to reinforce that they guests who come back to the Lodge with the most gas usually have the most fish. They have not been zooming around in the boat trying every spot for 15 minutes & they obviously had their lines in the water when the bite turned on. Yesterday most of the guests did the 20 minute run to Calvert Island but the 2 guests (a couple) that went to Kevin’s Corner 5 minutes from the Lodge & were the only boat there. They got 2 Tyees (Chinook over 30 lbs.) & it was caught on, you guessed it, a green flasher & white hoochie & both at 69 ft! When interviewed “post tide” on the dock they said there was more to the story but coyly said that they could not expound. Sometimes “what happens in the boats stays in the boat”! Here is some reading to get you up to speed on your flasher/hoochie technique.

And speaking of speed, faster is always better with the most productive speed being closer to 4 knots than 3 & definitely NOT 2 knots! Keep your tip up & your nose into the wind. Tight Lines, Simon & Stephanie. 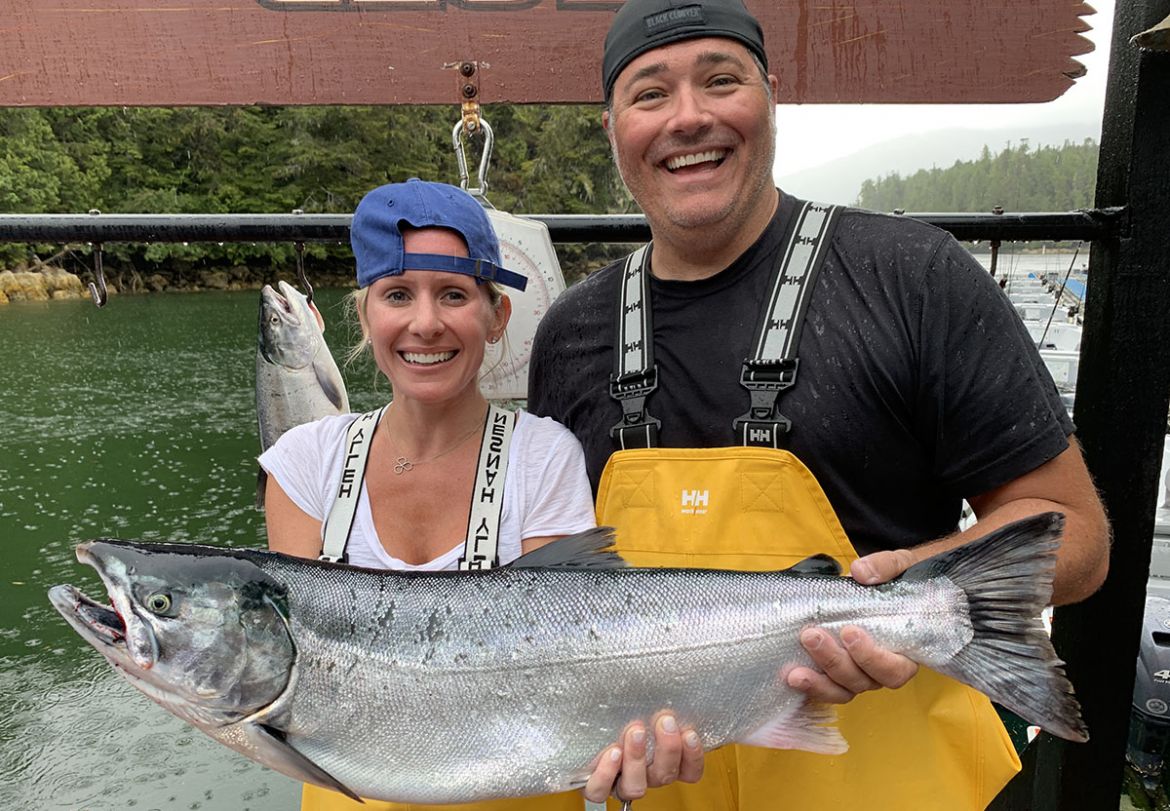 We joke all the time around the Lodge & especially at our daily seminars, that we are in the “World Series of Salmon Fishing” here in Rivers Inlet. If many a true word is said in gest, this would be the epitome of it. Why is Rivers Inlet the most coveted trophy salmon fishing destination in the world? Well, the record books tell the tale. The largest Chinook/King salmon EVER recorded was caught only minutes from our Lodge & tipped the scales at 126 lbs. Consistently there are many trophy Chinook salmon encountered in the 20-40 lb. range. So far we have had a number of Tyees in the high 30’s on our docks this summer & the biggest Chinook of the year tipped the scales at 43 lbs! A couple of years back, a fish estimated to be 83 lbs. was caught & released in Rivers Inlet.

When the hatchery crew catches these giant salmon in the rivers at the head of the Inlet to harvest their eggs & milk for the brood stock program to enhance the runs here in Rivers Inlet, they often encounter many fish over 90 lbs. And they see carcasses on the river banks from fish estimated to be well over 100 lbs. so they are still out there!!!! https://islandfishermanmagazine.com/chinook-king-salmon/.
And then there is the coho/silver fishing which is literally “off the hook” (excuse the pun). When the coho bite is ON in Rivers Inlet there is no better game fishing experience on the planet, hands down! Glass calm sea conditions, “Indian Summer” weather & double & sometimes even triple headers on 10 lb. + coho only minutes from the Lodge in calm waters. We usually see a number of trophy coho each summer that are over 15 lbs. And a few giant “hook nose” Northern’s pushing upwards of 20 lbs. How this translates to our guests & their fishing regime is that we instil excellence in them. They are constantly reminded that at any moment the bite on your line could be a 5 lb. fish or a 55 lb. fish, you just never know. So at all times you must be meticulous with your tackle, checking & double-checking your knots, line quality & sharpness of your hooks. It is NEVER “good enough” even in the last minutes before you pull your lines up at the end of a fishing session. Murphy’s Law would dictate that if at any time you fish with gear that has compromised quality, then that will be the moment when the fish of a lifetime hits your line. And even if you fight it perfectly, well within the range of the gear strength & then you make a tiny mistake near the end of the fight & SNAP! The line breaks & with tears in your eyes you watch your giant trophy salmon slowly swim away. So after this long pre-amble here is the BIG story …

The other day over at Calvert Island Scott “the Rookie”, one of our long-time guides, was out with some guests & they hooked into a monster. At first they thought it was a giant Chinook salmon as it hit hard & went down deep & sulked without moving too much. After an hour battle with max pressure trying to slowly coax this fish up to the surface, with little success, thoughts turned to the possibility it might be a halibut? Another hour passed & by now they had drifted well off shore into mid-channel without a sighting of the fish. Into the third hour they began hand lining it & finally got it to the surface to get a glimpse. With a mix of relief & disappointment they saw that it was a 300 + lb. salmon shark. Not common to our waters but obviously following the baitfish as the warm waters creep North at this time of year. The most amazing thing is that the 40 lb. test line held the weight of such a huge fish. Well done Scotty! And if it had been that mystical, elusive 100 lb. + Rivers Inlet trophy Chinook salmon they were prepared with excellent quality gear & the determination to get the fish to the boat! 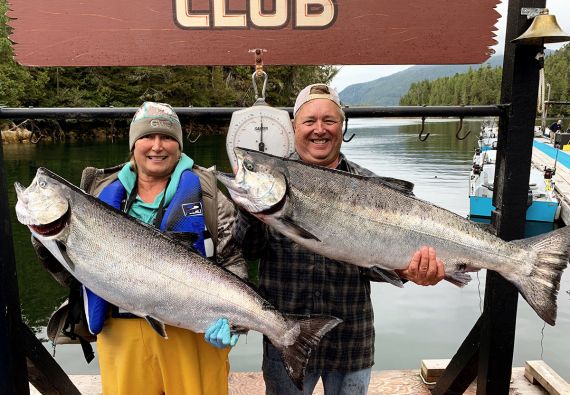 Hi Cathy,
Just wanted to send you a note to thank you all for taking care of our 7 guys from Tennessee…
they had an ABSOLUTE blast…best time ever!!
My husband has been going 15-20 times over the years & this was the best by far. They all raved about being taken care of, catered to, & the beds were wonderful… Thank you all again for what you do…it is great!!
TM, Office Manager, Knoxville TN USA

How to Make It

Step 1
Cut 6 tablespoons butter into 1/2-inch cubes, and refrigerate until ready to use. Melt 2 tablespoons butter in a medium nonreactive saucepan over medium-low. Add onion, sliced garlic, shiitake stems, tomato, black peppercorns, and bay leaf, and cook until vegetables are soft but not brown, about 12 minutes. Add balsamic vinegar and 1/3 cup water, increase heat to medium-high, and cook, stirring occasionally, until mixture is syrupy, about 4 minutes.

Step 2
Reduce heat to low, and add cubed butter, 2 to 3 pieces at a time, whisking thoroughly between additions. Season sauce with salt and pepper to taste. Pour sauce through a fine wire-mesh strainer into a bowl; discard solids. Keep sauce warm over a double boiler.

Step 3
Spear whole garlic clove with a dinner fork. Heat 2 tablespoons olive oil in a large skillet over high until just beginning to smoke. Add spinach; cook, stirring using fork with garlic clove, until spinach is wilted. Season with salt and pepper to taste; transfer to a colander to drain. Discard garlic clove.

Step 4
Wipe skillet clean with paper towels. Reduce heat to medium, and add 3 tablespoons butter. Add shiitake caps, and cook, stirring, until softened, about 3 minutes. Stir in corn kernels; cook until completely heated through, about 3 minutes. Season with salt and pepper to taste. Transfer to a bowl, and keep warm.

Step 6
Divide spinach among 6 plates; surround with corn and shiitakes. Place a salmon strip on top of spinach, and spoon vinegar sauce on fish. Garnish with a sprinkling of chives; serve immediately. 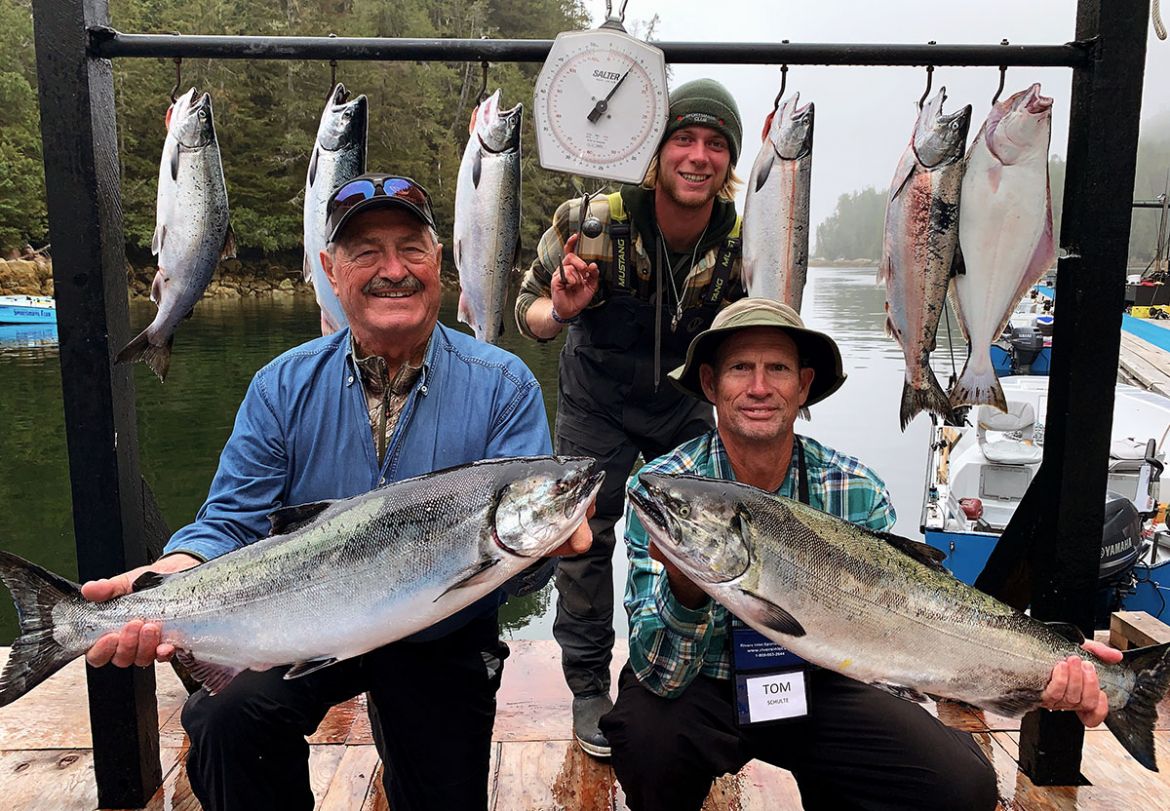