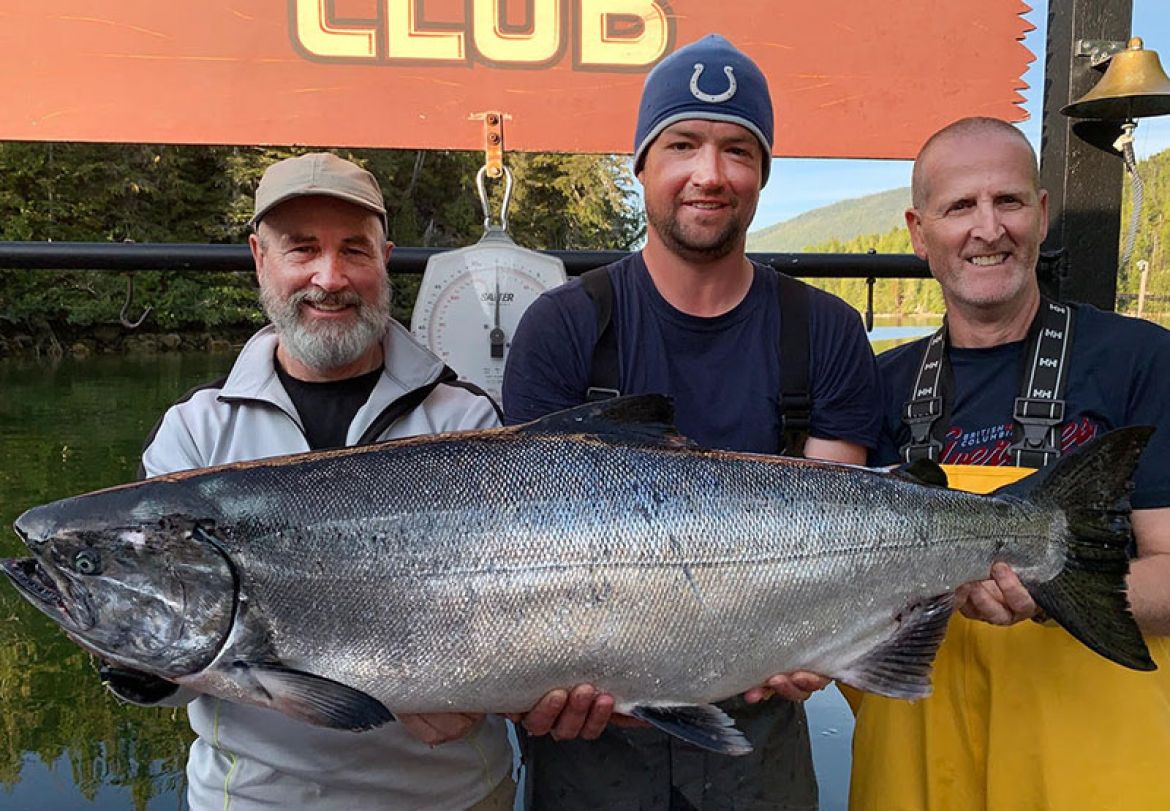 Are you still thinking about a fishing adventure this summer to Rivers Inlet in the pristine wilds of the B.C. coast? There is still time to put a trip together but don’t delay. The fishing is RED HOT & we have some space available in August. Just get your calendar out, call your family, friends &/or business associates & make it happen. And it is never too late to start the planning for a trip with us in 2020 to get the best choice of available dates & to guarantee 2019 pricing in case we have to increase our rates.

As for the fishing … what a season it has been so far! And such great weather with the perfect mix of sun & rain. This has been a pleasant reprieve from last summer’s hot dry spell. And of course the fabulous fishing. The school of coho has already moved in thick & we have seen the fish getting not only more numerous but larger in average size as the first “Northern’s” show up. These trophy sized, feisty, acrobatic game fish are noticeable by their prominent “hook nose” & obvious size. Some anglers have reported multiple double headers & even a triple header today when the bite was ON! We all have “coho fever”! The largest coho of the summer so far tipped the scales at a whopping 16 lbs. And there have been a number caught in the 14/15 lb. range. The Chinook salmon fishing has been steady as well with lots of chrome bright, hard fighting beauties hitting the dock. Last week there was a swarm of undersized Chinook that were released by our guests. This is a good sign for future years when they will return as trophy sized salmon.

The largest Chinook for the 2019 season so far tipped the scales & 43 pounds & it was an epic battle. There is a back-story to this as well. When he was called back into duty, Rookie guide Caylon (aka Stallion) was on break & actually already in the shower after a busy changeover morning. Returning guest Rod W. from Australia changed his mind at the last minute about hiring a guide on the first day & I had to get Caylon to jump back into action & head out fishing again. With his newly arrived guests, they dropped a line at nearby Rough’s Bluff only 5 minutes around the corner from the Lodge & they hooked into this “lunker”. It wasn’t a long fight but it definitely was an exciting one! It took the bait hard & it went straight down to the bottom & “sulked”. After “bulldogging” at depth for a while, it came straight back up to the surface & Rod had to frantically reel to get the line back to keep the pressure on it so as to be careful not to slack line it & have the fish spit the hooks. Up on the surface it ran hard & far & the chase was on! When Rod finally got it next to the boat & had a good look at the size of the fish, they all realized just how HUGE it was! After a few more spirited runs it came along side the boat one final time & guide Caylon scooped it up with the net & it hit the floor of the boat with a thud … TYEE!!!!!

Most of this red-hot fishing for coho & Chinook salmon has been at the favourite spots that are literally less than 5 minutes from the Lodge. Kevin’s Corner, Bull Island & newly christened "Rod’s Rock" which is a previously unnamed point right in between these two. Just to prove that nothing in fishing & life is fair, Rod W. not only bagged the biggest Chinook of the year with his 43 pounder, he & his group of fellow Aussies topped the leader board with their coho catching. They used the “classic” Sportsman’s Club “formula” of one teaser head herring at 69 ft. & one white hoochie at 99 ft. & literally couldn’t keep them off their lines, caught their limits & lost count of how many they released. Conveniently we have not had to do the 20 minute run across the sound to Clarke Point on Calvert Island all summer to find the school of coho as they have been right in our backyard for weeks now. However, long time guide "Scottydawg” who has returned for the season (his 17th) & has been leading expeditions to his favorite halibut haunt, Henderson Shoal right at the tip of Calvert Island. The conditions need to be just right to effectively fish this legendary local & that has happened a few times lately to great success. This past week some nice sized halibut were taken and many guests caught their limit. Just to re-cap, the new halibut limits are one halibut between 35” & 49” in length can be retained under the DFO recreational fishing license. If they measure less 35 inches two halibut can be retained to take home.

We have seen lots of interest this summer in targeting lingcod & many guests have caught their limit with many pushing upwards of 25 lbs. We also had the opportunity to use our fancy new descending devices that allow anglers to successfully release the incidental catch of closed species like yellow-eye rockfish back to the depths slowly thereby equalizing the pressure in their swim bladders & ensuring their survival. So look at those available dates, get with your people & call Cathy in the office in town today & book your trip with us today! 1-800-663-2644 – info@riversinlet.com.
Tight Lines from Simon, Stephanie & the Crew here at the Rivers Sportsman’s Club (RISC).