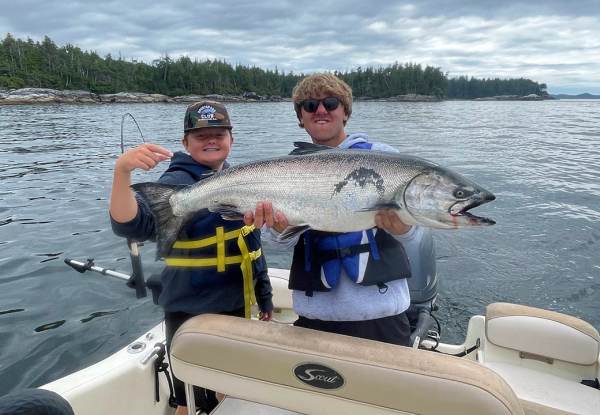 Vince with his first Chinook/king salmon EVER…

The Roth family arrived at the lodge on a 4-day trip ready to fish for salmon for the first time! Matt and his 2 sons, Jake and Vince, had no experience fishing in the ocean. Their positive vibes and good energy were evident from the time they arrived until their departure from the Sportsman’s Club.

On their first tide, we went on the short trip to Calvert Island, and we not only fished for salmon but had the excitement of seeing many different species of wildlife – Humpback whales, seals, otters, Orcas, bald eagles as well as shorebirds…Vince caught a nice size coho/silver and Jake caught the last fish of the day, an 18lb Chinook/king, in the last hour – it was already a trip of a lifetime.

The lodge staff enjoyed the Roth family and admired their great energy along with Vince and Jake’s well-mannered and kind smiles – they became a favourite with all of the crew!

As a young man, I met Simon in California & we became good friends, even travelling with him & his university pals to Vancouver Island. So, when it became time to take my sons, Vince & Jake, on a fishing adventure I did of course book us in at the Sportsman’s Club.

We travelled from Vancouver on a luxury Seair Seaplanes’ Cessna Caravan & arrived at the Sportsman’s docks to be greeted by the crew with open arms & smiling faces.

The guides we booked made all three of us feel right at home. They showed us all the fishing holes & how to get the gear done properly to bring the fish into the boat.

Sportsman’s Club staff were all hard working, keen to help at any time & always cheerful & friendly. We thought we’d known them forever…