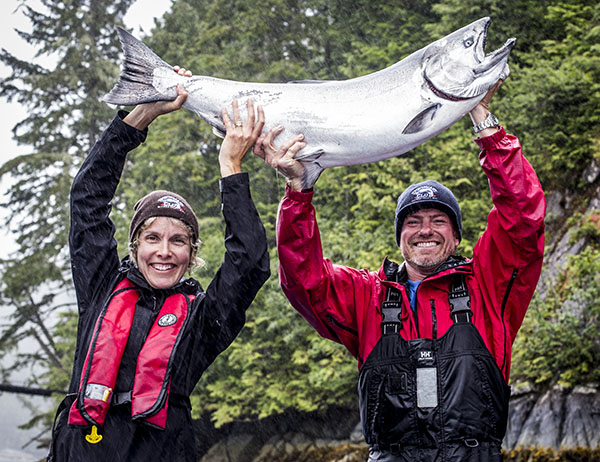 For over 30 years our Lodge Association, made up of operators in the Rivers Inlet/Hakai Pass Area, have contributed to funding a number of salmon hatcheries and enhancement projects in Rivers Inlet and at various other locations on the Central Coast of BC. This has been in cooperation with the Department of Fisheries and Oceans (DFO), and the Pacific Salmon Foundation (PSF). We have been very successful in enhancing these runs and increasing the number of returning salmon. Although not all these projects are in Rivers Inlet, we do get the opportunity to intercept many of these fish from other nearby watersheds as they pass through our waters on their way to their birth rivers. Specific to Rivers Inlet, 243,000 chinook (king) salmon brood stock were released into the Wannock River in 2014 with an expected high rate of survival. Estimated returns have been solid the last few years so things are stable and improving. This was evidenced by the 60% increase in the chinook salmon catch in Rivers Inlet for 2014. MORE …

News Release – Delta Hotel Name Change
I remember it as the River Inn when we used to stay there with our family 40 years ago. Then it became the Delta River Inn, then the Delta Vancouver Airport Hotel. Now this tried and true hotel has re-branded itself as the Pacific Gateway Hotel. If you are looking to make you hotel reservation at the "Delta" you will need to know that they have a new name. Nothing much else has change with most of the staff staying in and providing the same fabulous service.

Pacific White Sided Dolphins
Pods of Pacific White Sided Dolphins are often sighted while fishing in Rivers Inlet and it is always a pleasurable experience. As soon as they notice your boat they typically head straight for you and surf in the bow and stern wake doing a variety of acrobatics including jumps, twists and flips. Often, they travel alongside your boat for 20-30 minutes or so until their "show" is over and then continue on with what they were doing.
The name Dolphin is originally of Greek origin derived from the word delphus which means womb so it was “fish with a womb”.
Dolphins are cetacean mammals closely related to whales and porpoises.
The ancestors of the modern-day dolphins were originally land mammals and entered the water roughly 55 million years ago. This is evidenced by pelvic bones that are found in modern day dolphins that used to support limbs for walking.
The Pacific White Sided Dolphin is one of almost forty species of dolphin. The species is an average-sized oceanic dolphin. They typically weigh between 300 lbs. – 400 lbs. and reach lengths of up to 8 ft. Females reach maturity at seven years with a gestation period of one year. They can live more than 40 years.
The Pacific White Sided Dolphin is a particularly active dolphin found in the cool to temperate waters throughout the entire North Pacific Ocean. Their range is quite expansive as far South East as the South China Sea and to the SW the Baja Peninsula and as far North as the Bearing Sea. They seem to migrate North to BC and Alaska in the summer and South to California and Mexico in the winter.
They are able to travel so extensively because of their amazing physiology and the evolution of their hydrodynamic streamlined body adapted for fast swimming. The tail fin or fluke is the main source of propulsion while the pectoral fins together with the entire tail section, provide directional control and additional hydrodynamic “lift’ while the dorsal fin provides additional stability while swimming. These animals are designed to glide effortlessly through the water cruising comfortably at 10 MPH and reaching speeds of up to 35 MPH. As a result, when migrating they can travel hundreds of miles in just one day. Dolphins actually sleep with only one brain side of their brain in “slow wave sleep” at a time. This allows them to be conscious enough to breathe and to watch for possible predators and other threats.
They inhabit mostly the shallower seas of the continental shelves and are carnivores with sharp teeth, eating mostly hake, anchovies, squid herring salmon & cod. They breathe through a blow-hole in the top of their head where they also make clicking and whistling sounds. Each dolphin identifies itself by a unique “name-whistle”. The clicking sound is used to echolocate food and for navigation. They listen for the re-bounding clicks to give them the shape, size and distance of objects.
They can hear frequencies ten times or more above the upper limit of adult human hearing. They hear through a small ear opening on each side of their head. Hearing underwater is believed to be mostly done with the lower jaw, which conducts sound there via their lower jaw-bone. Further, the dolphin’s teeth are believed to function as antennae also receiving incoming sound and helping to pinpoint the exact location of an object identified in echolocation. They are extremely social creatures and their pods range in size from a few dozen to hundreds. To see a pod of these creatures can be quite the encounter! In my coastal travels I have seen pods that we estimated to number over 1000 animals. With these “super pods” it is difficult to estimate their numbers as there are so many and they move so quickly. Their total population is thought to be as many as 1 million. However, the tendency of Pacific White-Sided Dolphins to approach boats, coupled with their range and speed, makes it difficult to estimate their exact numbers. Pod members form close-knit groups and will often care for a sick or injured dolphins helping them to swim and even come to the surface to breath. Animals that live in such big social groups develop ways to keep in touch so besides their distinct “name whistles” young dolphins communicate with a touch of a flipper as they swim beside adults, like humans they hold hands with their young offspring.
For thousands of years Dolphins have long played a role in human culture and mythology as they were perceived to be somehow “magical” because of their amazing intelligence and perceived wisdom. They are one of the only animals that appear to actually “play” surfing, jumping out of the water and doing tricks all while they appear to be grinning. They are honored in ancient murals, paintings, coins and still to this day they are featured in the Coat of Arms of many countries.
They are associated with love and luck. Sailors through the millennia all have tales of dolphins rescuing sailors or ships in trouble. Dolphins could predict calm seas, and a ship accompanied by dolphins was sure to find safe harbor, fair weather and love.
More recently, Dolphins are an increasingly popular choice of animal assisted therapy for psychological problems like depression as well as developmental disabilities A number of militaries have employed dolphins for various purposes from finding mines to rescuing lost or trapped humans. We only hope for you that on your first or next trip to Rivers Inlet that you can be lucky enough to encounter a pod of the spectacular awe inspiring creatures.
http://en.wikipedia.org/wiki/Pacific_white-sided_dolphin