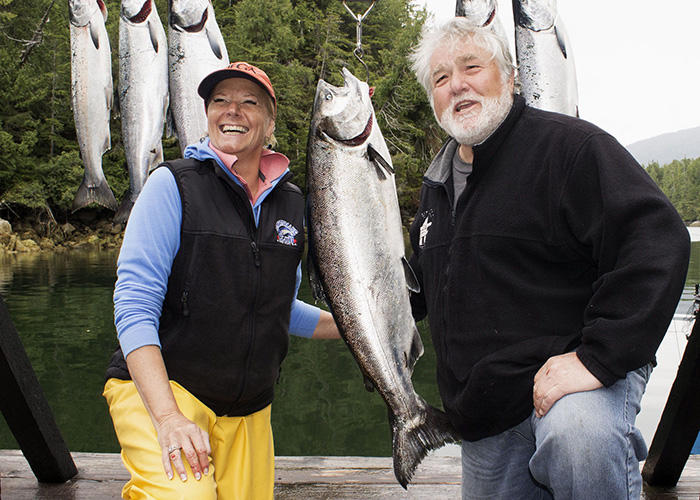 Last summer longtime guest Dennis finally brought Jill on his annual trip with us.  Once the ladies discover the "magic" of The Rivers Inlet Sportsman’s Club they will want to come back every year! 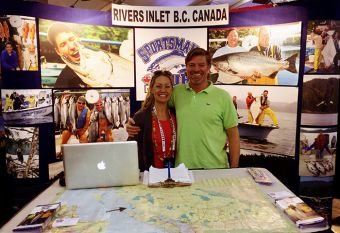 It was great to see so many of our past & prospective customers at the Barrett-Jackson Show in Scottsdale AZ. It had been a few years since we attended the Show & WOW has it ever gotten bigger & better. There was record attendance & records broken for car sales. I think we even sold a few fishing trips so it is likely we will be back again in January 2017.
As for upcoming shows, we are attending the Fred Hall Long Beach Show March 2-6 and the Fred Hall San Diego/Del Mar Show March 17-20.
If you plan to be around to attend either of these shows call/text Simon (604-938-3677) & we can arrange to meet to chat fishing.

My wife & I spent 4 1/2 days at the Sportsman’s Club in late July. Everything about our experience was top-notch. I expected good fishing but it was better than I thought it would be. Running your own boat & handling all of the fishing is so much more rewarding than sitting on a guided charter. However, you have the flexibility to fish with a guide if you chose which is nice. And the calm waters & proximity to the fishing allow for an open boat so you feel part of the raw, wild country around you. The staff was attentive to every whim & made us feel at home. The food was great, the cabin’s clean & warm. We got everything we hoped for & more. A great vacation that we will never forget. We will be back!
Jeff M. WA USA 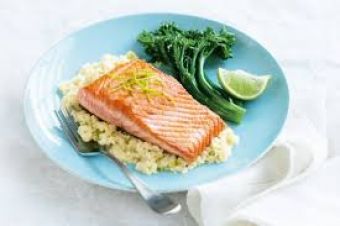 – Skin salmon, trim & cut into portion sized pieces
– Marinate salmon in lemon juice, canola oil & salt & pepper
(max 30 minutes of the lemon juice will “work” the fish)
– Pan fry in canola oil & butter on high heat for 2 minutes/side
– Steam cauliflower, gently mash with a drizzle of olive oil & a dab of butter
& add salt & pepper to taste
– Serve salmon on top of a bed of the mashed cauliflower & top with green onions & a squeeze of lemon and a grind of pepper
-Enjoy with any accompanying side vegetable or just on its own for a simple easy to prepare meal

We have only ever had one actual cougar sighting in the forest near the lodge over our 30 plus years of operation, so have no fear. There is no danger of encountering a cougar during your stay with us, but I just thought this was a good story. On the occasion of this sighting, my young family was walking the trail behind the lodge when a cougar appeared out of nowhere. They quickly scurried back to the dock with the curious cougar following behind. I say “curious” because if you see them they are not hunting you. We often see signs of a local cougar population. The most obvious one is their distinctive paw prints that are sometimes observed on our occasional excursions to some of the local sandy beaches. As the salmon stocks re-bound to record levels so do other populations in the wild, including those of the cougar. At the turn of the century it was almost extinct in the eastern part of North American due to habitat loss & hunting, but it is on the rebound. The past few years there have been sightings in multiple eastern states including an incident where a cougar was shot within the Chicago city limits. With the surge in remote sensing cameras & hand held devices with cameras, we are seeing more & more cougar footage.  Last week this video was shot near Courtenay B.C. on Vancouver Island where 3 curious young cougars surrounded a car!
The cougar goes by many names including mountain lion, puma & panther & are more closely related to the common house cat than to other big cats. It is native to the Americas & has a range from the Yukon to Tierra del Fuego, one of the greatest of any land mammal. They are a secretive, mostly solitary animal that are typically nocturnal hence the rarity of sightings. As a result, they are a revered & mysterious creature with lots of references to them in mythology, indigenous & modern culture. They prefer dense brush & rocky areas as here they have the greatest success with their preferred style of hunting which is to stalk & ambush their prey. Their main source of food is deer & sometimes livestock, but can be as varied as small rodents & even insects depending on availability. They are shy & avoid humans whenever possible so fatal attacks are rare. Often thought to be the “king of the forest” they are not always. They can be dominated by the gray wolf, black & grizzly bears & the other more powerful cat in the Americas the jaguar. More information on cougars can be found here. 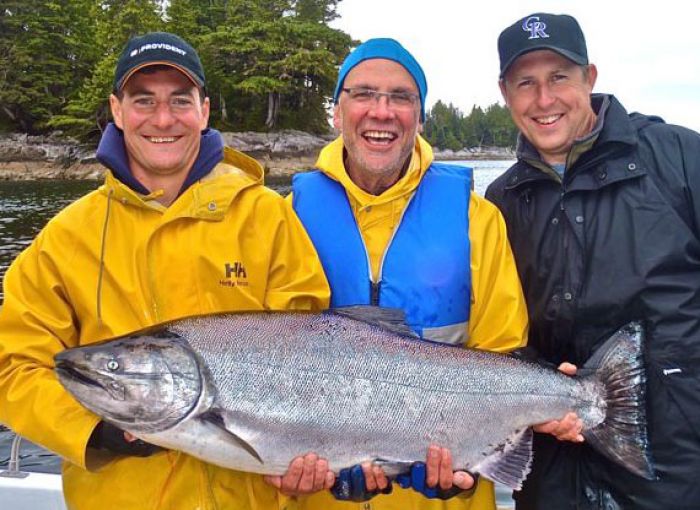 One of the best features about our operation is that you can custom cater your vacation to your needs. You can be self-guided, partially or fully guided. The choice is yours. Long time guide Scott "The Rookie"
(far right) working his magic as always consistently producing giant trophy salmon for his guests.