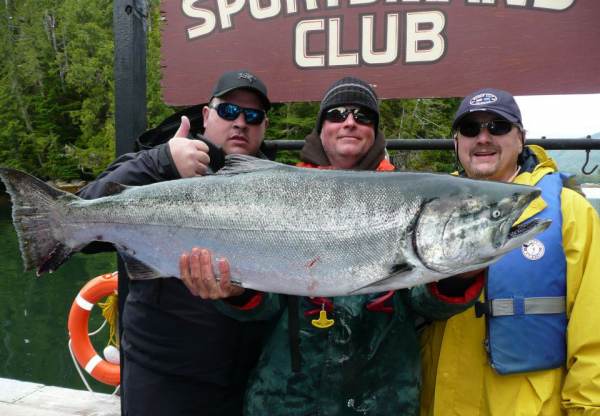 Fishing is a unique sport in that there is a delicate balance of luck & skill. However, after over 50 years of fishing & guiding it seems the more effort you put into the details the “luckier” you get! Growing up salmon fishing in Barclay Sound on Vancouver Island mostly involved fishing from larger boats with multiple passengers where we all took a “turn on the rod” so to speak. This meant that during a fishing session, one of the rods would be designated as yours for a pre-determined amount of time. Sure enough, usually minutes after the rod was deemed to be mine, the line would start screaming out with a FISH ON! This established early in my fishing career as a child angler, that I had “luck” on my side. I can still remember mucking around in the boat with the herring strips for the “Strip Teasers”, the first Luhr-Jensen trolling divers that we used pre-downriggers to get our lines down deep & the big old wooden Peetz reels. There have been lots of technology upgrades since then above water line, but funnily enough, the terminal tackle has not changed that much in over 50 years. Having luck was beneficial as a young fishing guide. After so many days in a row on the water my first-year guiding, it became clearly evident that being the “lucky one” was at least ½ the game, especially if you were the owner’s son! All I had to do was fine-tune the other variable of “skill”! The first & MOST important & perhaps the simplest skill in fishing is the preparation & maintenance of your gear & equipment & knowledge of its operation. This is universal to any & all types of fishing & boating. Once you learn that, you can start to work on all the rest of it. This is the beginning of it & we teach you all of it during our fishing/boating/safety/conservation seminar on arrival at the Sportsman’s Club, during our daily seminars & with our constant mentoring. After that, we try & keep the terminal tackle as simple as possible for fishing success. Our green flasher, white hoochie is the go-to set-up on the downrigger & is exactly what the commercial salmon trollers have been using for over 50 years! We also offer a variety of other flashers, hoochies, spoons & teaser heads for herring for you to experiment with or not, or maybe just stick to the tried & true? If you like the idea of real bait & want to learn more about “old-school style” salmon fishing, you can even try your hand at mooching. We provide all the bait, tackle & equipment & train you to do all of it. You bring nothing & don’t need to know anything about fishing. As a self-guided first-timer, you learn the basics & then follow the guides & fleet of other guests around to the nearby fishing spots & basically do what they do & success awaits. Even on your first trip after only a few hours of fishing, you start to master the skippering of your boat, running the gear & the specifics of each of the nearby fishing areas. You learn what depth to fish at, what time & tide, & even start to refine the terminal tackle to what you prefer & what you find success with.

I was lucky to be trained as a fishing guide by one of the best on the B.C. coast & it all boils down to one word, DISCIPLINE. Back in the day in Rivers Inlet, we used 20 lb. test monofilament line for main line & leader & we were exclusively mooching (slow trolling) with cut-plug herring. There was much less room for error with that light tackle set-up than with today’s downriggers, 30 lb mono-mainline & fluorocarbon leaders. You had to be so diligent with the integrity of your line & strength of your knots, as well as the sharpness of your hooks. You were constantly running your fingers down the leader & mainline looking for any burrs, nicks or weakness & if there were any, you would immediately replace that section of the gear. It was a lot of work. When you weren’t cutting bait you were constantly changing lines & leaders & tying knots & as always using a file or stone to sharpen your hooks. There was never a thought ever to putting down sub-standard or compromised gear that was “good enough” EVER! Why this diligence & attention to detail? During our morning motivational guide meetings in the summer at the lodge, we often remind each other that fishing in Rivers Inlet is like being in the “World Series of Salmon Fishing”. In the back of your mind & front of your tackle box, you always have to remember that the largest Chinook/King salmon ever recorded (126 lbs.) was caught only a few minutes from our lodge. Rivers Inlet is world famous for consistent trophy sized salmon so at any moment, the tiniest nibble on your rod tip could be a 5 pounder or a 55 pounder. You just never know from the intensity of the bite as the biggest lazy fish can be the slowest to take the bait just lightly nibbling at your herring. You have to be mentally prepared at all times & treat even the lightest unusual rod tip action like it is a possible 60 pounder, until you know for sure! There have been a few giant Chinook salmon estimated to be in the 80’s caught, measured & released in Rivers Inlet in recent years, so we know that they are still out there! You only have to learn this painful lesson of the consequences of sending down inferior fishing gear once & I learned the hard way. I can still remember the day it happened & have never ever repeated this egregious error since. I was feeling a bit unenthusiastic after a slow morning fishing & threw down some gear that was not “fresh”, I didn’t check it & it was “good enough”. It was about 15 minutes before heading back to the lodge for lunch, so I guess I was done in my mind & then suddenly BAM! We had a giant fish on, rod tip buried in the water & line screaming out straight down. It was the usual chaos of getting the other lines aboard, navigating around a few other boats, cutting lines & coaxing it out to seas away from the dangers of the shoreline. We were stabilized & into what was obviously a good fish. After over an hour-long battle with countless long dives, surface runs & jumps, we finally got this monster alongside the boat & got a good look at it. It was a behemoth of a fish, likely well over 50 lbs. It rolled over nicely & was in the perfect netting position. As I moved in with the net, the fish flicked its head, & in an instant the line broke & it was gone. It was not angler error in any way as my guest fought it flawlessly keeping his eyes glued to the rod tip & perfect pressure on the fish. It was complete guide error. I had put down a leader that was warn & obviously had a weakness in it & we paid the ultimate price. And the fish didn’t rush off. I remember that it slowly regained composure after a few laps around the boat & then quickly woke up & swam away living to fight another day. We were left in awe holding the one remaining 4/0 hook of our meager 20 lb test 3-hook leader, just a few curls of monofilament line that used to hold the other hooks! As guides, we always say you will remember the one that got away more than the ones you put on the BBQ, but this was a monster & we had it so close, right next to boat! We still had a tote load of fish & it was still a great morning fishing. However, I can still hear that distinctive sound of the line snapping, the hook flying towards us & the look of horror & dismay on my guest’s face. The lesson here is always the same. Before you ever even leave the dock at the Sportsman’s Club, & every single time you have your line out of the water, double check your gear. Run your fingers along the line making sure it is perfectly smooth & pull those knots as hard as you can to test their strength. Change your leader often & especially after a big fish as it will be stretched even if it is still looks & feels good. At our welcome orientation & daily seminars we will remind you of all this & so will our diligent dock hosts as you prep your boat for each fishing session. I might even personally jump in your boat & do my “Knot Ninja” routine & tackle box/cooler inspection on you before you head out on the water, so be ready & be prepared at all times! You will breathe a sigh of relief when you get that big one on & you know that your gear is perfect. It is a nice feeling of confidence & you always fish better if you are running a tight ship out there & maximizing your chance of successfully landing a hard fighting Rivers Inlet trophy salmon! You might just be the “lucky one”!