Enjoy your family time this weekend! Happy Easter from all of us at Rivers Inlet Sportsman’s Club!

Recent predictions by the Department of Fisheries & Oceans (DFO) are for another record run of salmon in our area in summer 2017. They are also predicting larger fish as more 5 & 6 year old Chinook/King salmon will be part of the mix. This positive outlook appears to be the result of a “perfect storm” of cooler ocean temperatures (resulting in more food & better ocean survival) less commercial fishing pressure for many years & the overall improvement in stewardship of spawning habitat.

What makes the Rivers Inlet Sportsman’s Club the best place in the world to come on a fishing trip for trophy salmon, halibut, lingcod & other bottom fish? Why did Rivers Inlet have the best fishing anywhere on the West Coast of North America last summer? A unique combination of returning & migrating runs makes for the most consistent salmon fishing anywhere in the world.
Here are the main factors that combine to make Rivers Inlet the foremost destination in the world for consistently catching lots of salmon & giant trophy fish. The salmon returning to our waters each summer to spawn are from a unique gene pool which results in the salmon growing bigger & fatter than those in any other watershed anywhere in the world. These 70+ lbs. Chinook/King & 20+ lbs. coho/silvers which are consistently caught in Rivers Inlet, are not typically caught in other areas. This is what makes Rivers Inlet a world famous trophy salmon fishing destination.

Rivers Inlet is a destination for tens of thousands of salmon specifically returning every summer to the 9 major rivers systems in our huge watershed. We are also a funneling point for feeding salmon migrating down the Pacific west coast to the hundreds of rivers systems as far away as California. This fact is evidenced by the results of the DFO hatchery head recovery program. This involves the heads of marked hatchery fish being returned for analysis to DFO. The results from the 2016 Hatchery Program again confirmed that salmon from the most variety of Pacific river systems are intercepted in Rivers Inlet. In 2016 there were 396 heads recovered from marked salmon by the lodges & handful of private anglers. 253 were Chinook salmon & 143 were coho. This was a slight increase from 2015 results. The rivers of their origin were 53% North/Central Coast, 25% Vancouver Island, 18%, WA/OR/ID/CA (predominantly Columbia River) & 1% Fraser River. Keep your eye out for the clipped adipose & ventral fins that indicate they are a hatchery salmon & you too can participate in this valuable program. 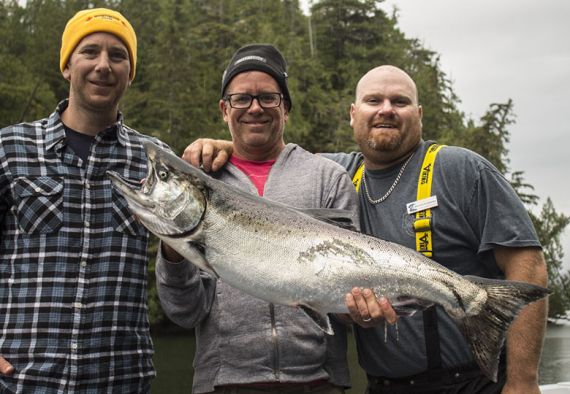 There are 2 main fish hatcheries on the Central B.C. Coast. There is Department of Fisheries & Oceans (DFO) facility at Snootlie Creek near Bella Coola just north of us. The other is a private one that the lodges in Rivers Inlet have been running at the head of the Inlet in various forms for over 30 years. This is a unique concept that has involved a coordinated effort by many lodge owners & staff, the Department of Fisheries & Oceans (DFO), the Pacific Salmon Foundation (PSF), the Wuikinuxv First Nations & private donors. The most remarkable improvement in our local fish rearing effort has been the construction of a brand new hatchery facility at the head of the inlet to rear our fish to help boost stocks. The new Percy Walkus Salmon Enhancement Facility (PWH) opened this past August. In the past, the process of incubating the fertilized salmon eggs had to take place at the Snootlie Creek facility & involved flying eggs/fry etc. back & forth from the hatchery to Rivers Inlet. Now we have our own fully operational facility right in Rivers Inlet. After successful water testing this Fall the PWH received over 180,000 fertilized eggs harvested from the giant Chinook/King of the Wannock River for incubation. The Wannock is one of our 3 main rivers systems (the other 2 are the Kilbella & Chuckwalla Rivers) that is home to the world famous trophy Rivers inlet Chinook salmon. In the tanks now at the new Hatchery are the 100,000 smolts that were reared at Snootli Hatchery that were transferred “home” to join the150,000 plus at PWH in late March. Coded wire tagging will be done on 50,000 of them starting in the next few weeks. We can’t tag them all & there is a cost to doing this & some mortality in the process so you kind of have to “shoot for the middle” in terms of tagging & fin clipping. In summary, things have never been better for the hatchery programs thanks to the generosity of all involved. We are excited about helping to secure the return of these unique giant trophy salmon to the waters of Rivers Inlet for future generations!

Hatchery programs are absolutely essential for the continued survival of all species of salmon. Today 1 in 4 Chinook salmon caught in the commercial or sport-fishery is a hatchery fish. So without these vital hatchery programs like ours, the species would not survive. These Wannock Chinook that we are enhancing are very unique fish. There are only 2 River Systems in the world that consistently produce salmon over 40 lbs. & 1 of them is the Wannock River. The hatchery program has already expanded to start enhancing Chinook in other river systems with hatchery fish including a re-start to enhancing Johnston Creek, home to our world famous trophy Northern Coho. The plan is also to start enhancing chum salmon as well. What actually happens in the brood stock program is quite interesting. In the fall a team sets out to capture some of the returning salmon for “brood stock”. This is done with a net in the river with the grizzly bears often snorkeling through the river at the same time trying to get their salmon lunch. The captured fish are then milked of their eggs & row right on the banks of the river. The fertilized eggs are then incubated in the hatchery(s) & then about a year later they are released as fry. Then 4 + years later after their adventures in the big-wide ocean they return to the river of their birth to spawn & the lifecycle continues.