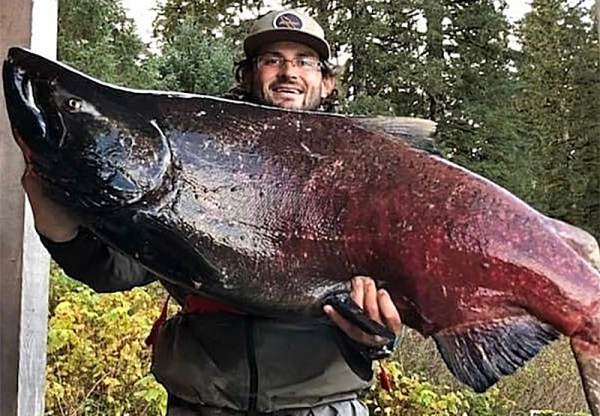 Almost forty years ago, the Lodge owners in our area decided that we needed to take things into our own hands & enhance the salmon runs in our area using our own initiative. We formed an association of lodges on the central B.C. coast with the sole purpose of using our own resources to start a private hatchery program to raise these giant Chinook/King salmon that are unique to Rivers Inlet. The Rivers Inlet North Coast Salmon Enhancement Association (RINCSEA) was formed. We worked in conjunction with the Department of Fisheries & Oceans (DFO) & First Nations to enhance the Chinook/King stocks in our watershed. This was a complicated endeavor, off the grid, in the middle of the wilderness, but as a “team” we were up for the challenge.

Once we had all the equipment & crew in place, the first stage in the process involved the actual collection of the eggs & milk by fishing for the brood stock of salmon in the rivers. Our primary enhancement focus was the legendary giant King/Chinook salmon run. These fish show up in the rivers at the head of Rivers Inlet in October, so we would send a team up there to fish the banks of the river to catch these brood stock fish. We would then hold them in perforated tubes in the river to keep them alive for a week or so and hopefully away from the bears! When we had the right number of “ripe” males & females we would extract the female eggs & mix them with the male milk & start the fertilization process. We would simply do this in a 5-gallon bucket as we tried to emulate a male clouding a female’s egg nest (a “Redd”) in the gravel of the riverbed. This mix would then be incubated in our local hatchery facility. Through the fall & winter the embryos develop. In the spring the eggs hatch & the alevins emerge. We would then keep our fry in tanks for up to another year & then release them into the river. Here the conditions of their natal stream (scent, chemical cues & angle of sunlight) would be imprinted on the fish so that one-day they will return to spawn. Eventually environmental cues cause the fry to begin their migration downstream towards the ocean. At this time, they become smolts, scales grow & they turn silver. Due to a variety of circumstances the hatchery in Rivers Inlet closed in the mid-90’s. With no proper hatchery facility, we had to then shift our program north to an existing facility, the Snootli Hatchery near Bella Coola. After 2 years when the fry were ready for release we would fly them back to Rivers Inlet via seaplane in tanks for release. Chinook salmon spend 4-8 years in the ocean before journeying back to their birth river to spawn & continue their lifecycle. These giant trophy Chinook salmon that define Rivers Inlet as a world class fishing destination tend to live for 5-7 years. This is part of the reason why they grow so BIG! After 30 + years of enhancing these runs & some great success (& a few trials & tribulations) & even an attempt at enhancing the wily coho salmon in Johnson Creek, the RINCSEA group throttled back our efforts. Fast-forward to today, a new regime was formed between the DFO, the Sport Fishing Institute of BC, RINCSEA, other local fishing lodges, as well as First Nations. The ultimate goal was to get a new hatchery facility built in Rivers Inlet. This happened in 2016 with the completion of the $1 million dollar Percy Walkus Hatchery. This year the hatchery is on track to release 300,000 smolts. The goal is to get up to the 500,000/year that RINCSEA released back in the day. We are more excited than ever about the future of the salmon and look forward to sustaining salmon stocks for future generations to enjoy and grateful for those who have contributed to this with their time, money and enthusiasm. If you would like to donate to this worthy cause, please contact us at: info@riversinlet.com