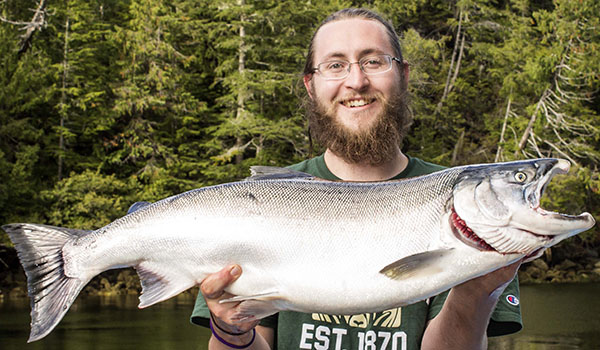 Later in our season the BIG Northern “hook nose” coho show up reaching upwards of 20 lbs. Here is first timer Chris Baker who tied for the biggest of the season with this 17 lbs. beauty.

This year, we had lots of “first timers” at the Sportsman’s Club.  Most of them came with “old timers” as their new guests. They were filled with anticipation & expectations having heard all the stories about the adventures that await them in Rivers Inlet. There is an infectious enthusiasm you feel from the first timers when they emerge from the seaplane & make their first steps onto our floating island off the grid in the “middle of nowhere”.  These first timers are usually wide-eyed from the flight (for many it is their first trip in a seaplane) & the breathtaking scenery they see en route.
As many seasoned anglers know, there is a lot of luck involved in fishing. Certainly, you can prepare yourself with good technique, gear maintenance & knowledge of where & when to fish, but at the end of the day luck is a huge factor. It seems that lots of first timers are particularly lucky, maybe because of all that pent up “fish karma”? However, this is both good & bad as when they catch trophy fish on their first fishing adventure they don’t always appreciate the “magic” of what they have caught. As we all know, you don’t always “get them” every time. This is the “Masochistic Mystique” of the sport that is salmon fishing.
I had a similar experience the first time I went heli-skiing at my friend’s lodge Snowwater. It had dumped over 2 feet the night before and we were literally neck deep in fluffy light powder snow. It was the best skiing I had ever done in my life & I thought it was like that all the time. I went back the next year to more typical boot high (but excellent) conditions, and it was only then that I realized what I had experienced the year before.

One of our best first timer stories of the year was Charlotte who came up with her father and grandfather. There is nothing like 3 generations of family spending quality time adventuring amidst the majestic splendor of the BC coast while chasing giant trophy salmon. After being invited to fish with another longtime guest Bob S. and his guide, it “happened”! After already being gracious enough to invite her on his boat Bob showed even more class by offering Charlotte the rod that was screaming out line with a giant salmon on it. Charlotte rose to the challenge with her newly acquired fishing skills displaying great form keeping the rod tip up & perfect pressure on the fish. After over an hour battling her feisty king/Chinook salmon, the giant trophy fish was in the net accompanied by lots of hoots, hollers & high-fives! Charlotte was crowned “Queen of the Tide” back at the Lodge after the “fish of a lifetime” tipped the scale at 35 lbs. … TYEE! Not bad for a “first timer”!

TWO THUMBS UP FROM A FIRST TIMER
“After the breathtaking flight up the coast you settle into the Rivers Inlet experience. Barbara, Simon & the “Crew” work tirelessly to ensure your stay is comfortable & rewarding. From the helpful dock hands to the smiling staff throughout the lodge, all aspects of your stay are taken care of. The fishing is second to none. With or without a guide, you come back to the lodge with some beauties. Sure is nice to stock the freezer with your catch. I’ll be back with family or the “buds”.”

METHOD
1. Make the marinade by mixing together all the ingredients. Place the salmon fillets in a small bowl and spoon over the marinade, turning the fish so that it’s nicely coated. Cover with cling film and leave to sit for 10 mins (or longer if you have time).

2. Meanwhile, cook the noodles following pack instructions, then drain and sit them in a bowl of cold water.

3. Heat a non-stick frying pan. Add the salmon fillets, skin-side down, and leave for 3 mins. When the fish is slightly crispy, flip over and cook for a further 3 mins on the other side. Just before you remove the fish from the pan, add any remaining marinade and let it sizzle for 10 secs. Place 2 of the fillets, skin-side up, with their juices on a plate and cover with foil to keep warm. Put the other 2 fillets on another plate if using for Flaked salmon salad (see ‘goes well with’), cover with foil, leave to cool, then chill.

4. In a frying pan or wok, heat the rapeseed and sesame oils over a high heat. Add the spring onion, garlic, chilli and ginger, and stir constantly for about 1 min. Add the sugar snap peas, pak choi and pepper, and stir for another 1-2 mins, then add the cooked noodles. Toss well, then add the soy sauce, fish sauce and lime juice, and mix until well combined and the pan is sizzling.

5. Remove from the heat and divide between 2 bowls. Top each with a salmon fillet and drizzle over any juices. Sprinkle with coriander and serve.

Sea Otters – They Are Back In Rivers Inlet!

It was two summers ago that we saw my first sea otter in Rivers Inlet.They are often confused with the rivers otter. We see these little critters all the time swimming in our Bay & even up on our docks at the Sportsman’s Club, as a family has resided there for many summers. I spotted my first sea otter from quite a distance away along just off from “The Wall”. Having observed them before on the Brooks Peninsula off the west coast of Vancouver Island, I was familiar with their profile. They are very distinctive due to their size. They weight between 30-100lbs., which is substantially larger than our resident river otters. They also have a distinctive posture & behaviour in the water. They like to drift around offshore lying on their back while they rest & feed, even tend to their young this way. Or, they like to pop their heads up out of the water being very inquisitive like gophers. Most often they are solo, but sometimes they can be observed in pairs or small groups, & sometimes they are seen holding hands, especially when napping to create a “raft” for stability. These rafts are typically 10-100 otters but have been observed where their numbers were estimated at over 1000 otters! The main behavior that sets the sea otter apart from other sea mammals is their use of tools like rocks to dislodge & open shellfish, their main food source.

The sea otter is a very integral component of the history of the exploration on the Pacific North West. From the late 1700’s to the early 1900’s they were hunted to virtual extinction due to the high quality of their fur. Sea otters have the densest & most luxuriant of all pelts in the fur trade & ultimately this led to their decimation & demise due to over harvesting. Their population was estimated to be well over 300,000 in the 1700’s with a range that stretched in an arc across the North Pacific from Northern Japan all the way down the Alaska/BC coast to central Baja in Mexico. By the end of fur trade in the early 1900’s, their numbers had been reduced to an estimated 1000 to 2000. In the 1960s, a plan was put into place to re-introduce the sea otter to the west coast of Vancouver Island by transplanting otters from the surviving colonies in Alaska. Over time, this was very successful with the BC population now estimated to be 4000-5000 & colonies moving back into coastal areas like Rivers Inlet where we have observed them the past two summers. Click here to find out more about these amazing creatures. 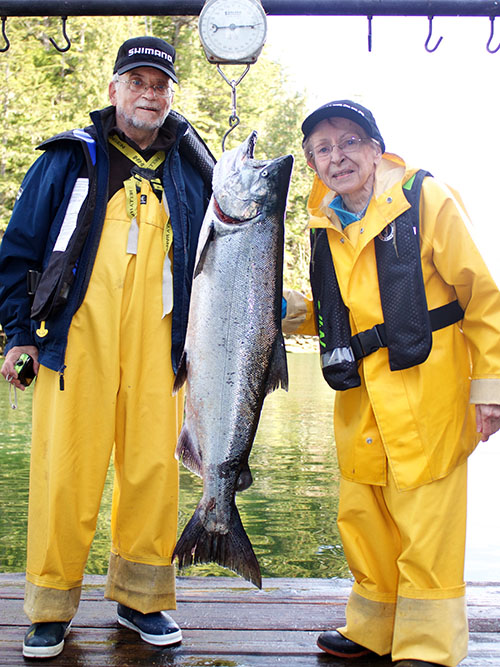 Alberte and Ivan had so much fun on their first trip with us
that they have already re-booked for next summer!