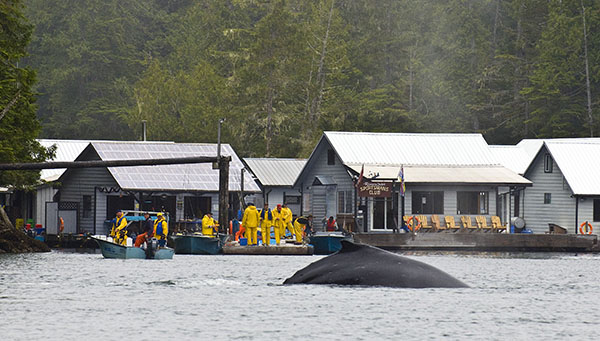 Whale watching right from the lodge. Sometimes they are so close that they almost hit the docks!

At the Rivers Inlet Sportsman’s Club often we are asked if guests get the opportunity to see whales when they are fishing. Yes, perhaps we are one of the best locations in the world where you can combine trophy salmon and halibut fishing with whale watching. Most common are sightings of Gray and Humpback Whales with the occasional pod of Orcas passing through.  Rivers Inlet is on their migratory path as they make their annual journey north in summer to feed on the sea life that thrives in the rich northern waters.  Many of these whales go no further than the central coast at Rivers Inlet, so that’s why we get to see them all season long.  In the fall, the Grays & Humpbacks head south to warmer waters to breed and give birth. This return trip is over 15,000 miles and is the longest annual migration of any mammal. So forget Seaworld and come and join us for the ultimate whale watching experience “Rivers Inlet style”. But don’t forget you still have to keep your eye on your rod tip!
Usually, the Humpbacks & Gray whales show up in Rivers Inlet in early July, and sightings typically taper off around the end of August.  The whales are spotted offshore of the mouth of Rivers Inlet as well as in the shallow bays where they have followed their feed. Without a doubt, the most spectacular sight is watching them breach.  Scientists are still unsure of the exact reason for breaching. Whales seems to breach more when they are in groups suggesting social reasons for this behavior including assertion of dominance, courting or perhaps even warning of danger. A few times in the summer we see a pod of Orcas (Killer Whales) and the occasional random lone Minke Whale but these sightings are much rarer. The easiest way to identify these whales is by theirsurface profile.

Good News From Our Northern Waters

There has been lots of chat this spring about the record runs of salmon that are predicted to return to the salmon rearing rivers of the Pacific North West this summer. The Canadian Department of Fisheries and Oceans (DFO) recently upgraded their predictions on salmon runs for 2014. DFO are saying that this salmon fishing season we could see the best returns in modern history so anticipation is running high for another record year!
The recent record catch reports from the waters of Northern BC and other locals where there is an early run of chinook (king/spring) salmon seem to support this. Hatchery records of chinook salmon intercepted in Alaska and BC’s northern waters indicate that the bulk of our Rivers Inlet salmon head north during their lifecycle. In the spring these salmon head south to their birth rivers in BC, WA, OR and as far as CA. So good fishing up north means good fishing for us in a few weeks when our Rivers Inlet salmon and the salmon headed to the hundreds of rivers of the Pacific Northwest pass right by our lodge on their way home.
Another interesting fact garnered from the wire coded tags that are located in the heads of hatchery fish is that fish from the greatest variety of rivers are caught in Rivers Inlet. Not the most hatchery fish as we are isolated and there aren’t many anglers so not many hatchery fish heads are recovered. The widest cross-section of rivers are represented in our hatchery salmon catch data. What this means is that we are on the “Salmon Migration Highway” and that is why our fishing in Rivers Inlet is so consistent. If there is a lull in the waves of fish returning to their birth waters in Rivers Inlet, you would never know it. There are so many other fish going by our doorstep to hundreds of rivers along the west coast that the action is often non-stop all summer long.
The whole concept of who “owns” these migrating fish and how much each stakeholder in the US and Canada gets to harvest has been a topic of debate and discussion for years. The Pacific Salmon Commission (PSC) was formed in 1985 to manage the allocation of these fish so that commercial, aboriginal and sport anglers in both countries get their fair share of this valuable resource. The future of wild salmon stocks in Rivers Inlet has never been brighter as a result of these management policies and the success of enhancement programs through our lodge funded private hatchery.
We look forward to many great years of fishing for future generations.

Father’s Day – The Ultimate Gift – Time at the Lodge

Are you tired of trying to get the attention of your friends and family, particularly your kids and grandkids? Everyone seems to be so absorbed by their phones and various screens these days that we sometimes simply forget to look up. What about yourself, are you taking time away from the everyday activities to reflect on life and have some fun? Rivers Inlet is the perfect place to “escape” for a few days as we are remote with float plane access only and no cell phone service. Of course we have satellite WiFi when you are back at the Lodge but we find that most people prefer to turn their devices off and enjoy a true “get-away". If you have not already done so, there is still time to round up family and friends and join us for a fishing trip this summer. Father’s Day is coming up soon and a trip to the Sportsman’s Club is an ideal gift. Your family adventures with us in Rivers Inlet will make for priceless memories and photographs that you will cherish for a lifetime. So put your phone to good use right now and call your family and make Father’s Day extra special this year by planning a trip to our Lodge.

Recently, a whale called “Granny” was sighted off the BC Coast, and based on her reproductive history she is estimated to be over 100 years old! Her name is Granny – an Orca or Killer Whale & a member of the dolphin family. She has been roaming the Pacific Ocean all her life. Granny is identified by the white patch on her dorsal fin alongside a half-moon-shaped notch. She is said to be the matriarch of one particular whale pod and is thought to be 103 years old. Although her age is an estimate, studies into her reproductive history have plotted her birth all the way back to 1911. The week before she was seen near Victoria BC, she was spotted in California, so she traveled over 1000 miles in under 7 days! Living along the west coast of North America is good for your health.
There are 3 main types of Orcas or Killer Whales:
Resident – These are the whales we see in the waters of the Pacific North West around Victoria & Robson Bight. Occasionally, they venture up to Rivers Inlet so we see them a few times each summer. They live in complex and cohesive family groups called pods of from 6-60 whales (estimated). These pods appear every summer in our waters, but despite decades of research, where these animals go for the rest of the year remains unknown.
Transient – Transients generally travel in small groups, usually 2-6 and feed almost exclusively on mammals such as seals and are less social than resident Orcas.
Offshore – Not discovered until 1988, when a humpback whale researcher observed them in open water. As their name suggests, they travel far from shore and feed primarily on schooling fish. However, because they have large, scarred and nicked dorsal fins resembling those of mammal-hunting transients so it may be that they also eat mammals and sharks. They have mostly been encountered off the west coast of Vancouver. Offshores typically congregate in groups of 20-70, with occasional sightings of larger groups of up to 200.

Looking for a little twist on your
classic BBQ salmon recipe?
This Asian inspired recipe
is sure to do the trick.

"Dear Simon and Barbara,
I wanted to share with you and your entire Rivers Inlet crew what a wonderful experience my friend Jerry, my son Syd and I had last year. The fishing was spectacular. One of the best salmon fishing experiences I ever had. My son’s first trip and it could not have been more epic for him. We all caught our limits, salmon and halibut, and battled with some nice kings. We won some and lost some but each one hooked was a RUSH! My son was weaned into your fishing family. I knew he was becoming a fisherman when he and Jerry started rousing me about catching the smaller of everyone’s halibut catch that day. They both ganged up on me. It totally put a smile on my face. My son, Syd, the fisherman and my little buddy. Your guides were amazing, fun and kind. My son had a blast with them. Your staff is second to none, what great young people. The food was probably the best I ever had staying with you this go around. Simon and Barbra you are two amazing people and I am proud to call you my friends. I am looking forward to my next trip with you.
All the Best and Always lots of Love to my Rivers Inlet Family."
S Cole 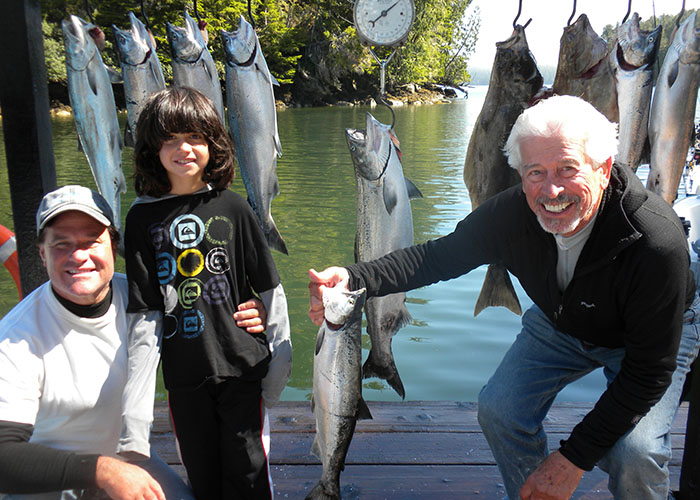 Syd, Syd Jr. and Jerry with a nice morning’s catch of coho (silver) salmon and halibut.

Now that you know all about the whales you will see when you visit us, if you have not already done so, contact us today to book your fishing adventure. We still have some space available during July & August which is the peak salmon & halibut season in Rivers Inlet.