There is likely no more pandemic friendly activity than fishing.

Typically, anglers seek to go to far off places in search of solitude, isolation & the pursuit of their elusive catch. As we are all well aware, people all over the world people are staying closer to home these past few months. Many are searching out more local fishing opportunities & the fishing industry can barely keep up with demand.

From tackle shops to boat manufactures to marinas there has never been a better time to be in business of being outside & on the water. While other businesses try to dig themselves out from the damaging effects of the isolation, quarantine, these people are making sales records with increases in the 100% + range. People who have been talking about going fishing more or even taking it up the for the first time are get out there & doing it! 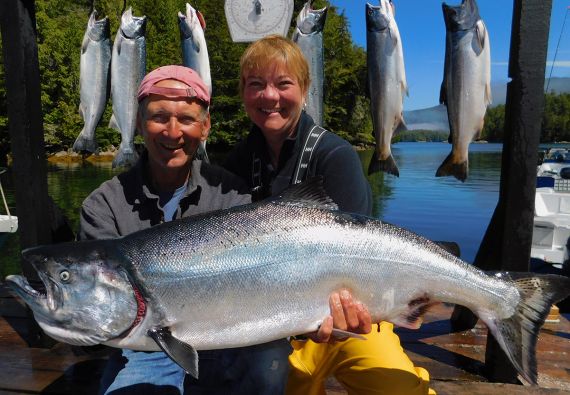 “We’ve been doing this for 160 years, & the last time we saw a push this big was when Brad Pitt made ‘A River Runs Through It,’ ”says Simon Perkins, the newly appointed president of fly-fishing giant Orvis. Another good measure that fishing in general is booming is the 30-50% rise in fishing license sales across North America. As the world opens back up & with all the pent-up interest for seasoned angers, plus all the new participants, you had better make your Summer 2021 fishing plans now or you will be disappointed. And airline travel & hotels rates are at all-time lows, but that won’t last for long you can bet your lucky lure on that!

If you have never done it before that doesn’t matter, no experience necessary. We are calm water fishing only minutes from the Lodge & the technique is simple & easy to learn.  We train & mentor you with our daily seminars. Or if you prefer, you can hire a guide for all or part of your time. It depends on your fishing experience & eagerness to learn the life-long craft of ocean salmon, halibut & lingcod fishing. Contact us today to book your fishing adventure of a lifetime in Summer 2021.

There are six major salmon hatchery facilities on the Central Coast of BC including the Pearcy Walkus Enhancement Facility at the head of Rivers Inlet.

We just need to back up for a second & give the back story.

When & why did salmon hatcheries start in the Northwestern Pacific? As the wagon trains moved Westward, expanding into the “frontier”, there were no catch limits on fish & no laws to protect fish habitats & balance water use for agriculture & power/dams. As a result, fish stocks began to decline. By the late 1870’s, concerns over these declines prompted fishery studies & fueled the establishment of “fish spawning stations” for collecting & hatching fish which later became fish hatcheries. In 1875 the US Fishing Commissioner was so bullish on the hatchery programs, that he thought that there was no need for regulation.

It was still legal to fish with dynamite! Then after 100 years of success there was a backlash against hatchery produced fish. The theory is that the hatchery fish have an inferior ability to reproduce, & if & when they did spawn a “dumber” fish was the result & it ended up competing with wild fish for limited spawning grounds. Luckily common sense prevailed & we have collectively decided that more fish is better than less so the culture of fish hatcheries has come full circle with renewed enthusiasm & financial support.